On Wednesday 2nd September, a man living in the olive groves surrounding Moria camp was found to have COVID-19. This was the first positive case among the camp population. The camp lockdown, in place since March 18, was reinforced. The Ministry of Migration announced that until 15 September, ‘entry and exit from the hosting structure will be explicitly prohibited’, and that the Greek police ‘will have an enhanced presence in the area around the structure’ to enforce the ban ‘24 hours a day’.

On Friday 4th September, a group living in the camp announced a food strike. The Dunya Collective announced that about 100 migrants ‘blocked the supply of ready-made food to protest against the poor quality.’ Today, 5th September, a mass demonstration took place in the food distribution area of the camp, attempting again to block the distribution of food. The demonstrators spoke out against the inedible quality of the food, for which they are charged 15 euros, as well as the fact that they are forced into tight spaces fighting over food at a time when COVID-19 has been detected in the camp.

“We say there is Corona in the camp and yet in the food line there is a huge gathering there to take food so it is very likely that we will be contaminated.”

The lockdown has left those living in Moria camp totally dependent on its distribution services. Our assembly members also report that single people find it very difficult to eat. ‘Any time they arrive at the eating line they are told “for single people it’s over”, there is only left for the family. They can go for days without finding food.’ 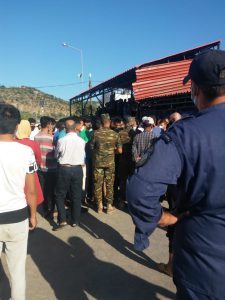 Greek police and military attempt to persuade demonstrators to leave

It is clear that, for the last six months, the priority of the Ministry of Migration has been to segregate and contain the population of Moria camp, pandering to rising local sympathies for far-right politics. Our assembly members have reported a rise in instances in which local citizens have taken on the role of the police themselves, attempting to control the movement of migrants from the camp to Mytilene across Moria’s surrounding fields. This included attempted murder as a farmer shot two migrants in the back, and a case in which migrants were chased from land by a local using heavy industrial machinery. Over the last month and a half, local protest groups have organised four demonstrations against the presence of Moria camp, during which an NGO vehicle was attacked and had to flee the scene under police escort, and the cars of suspected NGO workers were smashed. On August 20, a demonstration led to skirmishes in the camp during which far-right protesters beat migrants while police allegedly watched and refused to intervene.

The forced closure of MSF’s quarantine clinic and the total absence of a public health plan for the camp, together with the increased police presence, makes clear that the priority of the Ministry of Migration is not protection but segregation. Although the Greek government approved a Dutch-funded medical space, which was opened on 20th August, it is still not operational. As news of the first positive COVID-19 case came in, the Ministry used the opportunity to declare that the camp would be enclosed, and that the construction company AKTOR would be given 845,000 Euros to build a wall around it.

We stand in solidarity with the food boycott of Moria camp! We say no to the creation of a ghetto! We say protection, not segregation!