Migrant protest under the Moria lockdown

Over one month ago Greece implemented severe lockdown measures in Moria camp. Since then, as migrants have been abandoned and contained out of sight, protest has increased.

On 18 March 2020, the Ministry of Migration imposed strict restrictions on movement in Moria camp, leaving most people trapped in the camp with limited access to goods and services in Mytilene. Of the 21,000 people in the camp, just 100 people per hour between 7am and 7pm daily were allowed to leave.

A parallel system of COVID-19 restrictions is in place for migrants. While the general population is permitted to leave home according to specific criteria, migrants in the camps must secure the written permission of the police and security authorities. It is claimed that the strict restrictions on movement are in place to prevent the transfer of COVID-19 from the cities into the camp. But the lockdown exists in the context of a total absence of preventative measures. Migrants frequently report a lack of running water, social distancing is impossible given the overcrowding, and medical services are stretched beyond capacity. 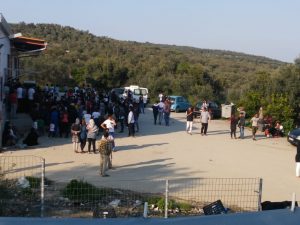 People in Moria camp try to buy food during the lockdown

The foundations of the migrant lockdown were built on established racist fault-lines in local society. Nine days after the imposition of restrictions, the government announced the suspension of the 90 Euro per month cash assistance program for those in the camp. The measure was implemented in order to prevent migrants from going to town to access ATMs. Over the previous months, access to ATMs had become symbolic of a lost way of life for the island’s Right. Municipal Councilors and the Regional Governor complained that locals could not access cash ‘because of the queues of migrants’, while witnesses reported vigilante groups establishing a ‘locals first’ queuing system at ATMs. Although the government announced that ATMs would be provided in the camp, one month later they still have not been built. When migrants were finally allowed to access cash assistance on April 11th, hundreds attempted to visit the local Lidl supermarket, but were sent back to the camp by police. On the same day a mini-market in the camp shut its doors after being overwhelmed by the number of people trying to visit.

The Moria camp lockdown increases the pressure on those living there and trying to survive. But it has also provoked increased resistance. Due to the lockdown, demonstrations remain confined within the grounds of the camp, where a lack of media access means they are almost invisible. The world has found a renewed focus on the overcrowded conditions in Greek camps due to the potential health crisis a COVID-19 outbreak could cause. But the demands of those demonstrating show that the concerns are not only about a future health crisis, but also about the life threatening conditions, intensified by the lockdown, that are embedded in the structure of the camp itself. 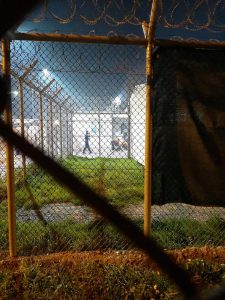 On 5th April, prisoners in Moria Pre-Removal Detention Centre went on hunger strike, stating ‘we are here to die or to obtain freedom’. Prisoners demanded their immediate release, as the majority are held awaiting deportations that cannot happen for the foreseeable future. In the months leading up to the hunger strike, as the impact of New Democracy’s migration laws began to bite, Deportation Monitoring Aegean reported that detainees had lost hope. Since 6th January 2020, when a 31-year-old Iranian man committed suicide, there have been repeated suicide attempts, many of which were preceded and followed by incidents of police violence and harassment. The hunger strike ended on 8th April after allegations that a police special-forces unit had tortured detainees. 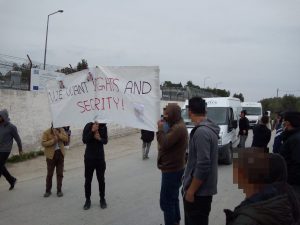 On 10th and 21st April, migrants in Moria camp demonstrated again, demanding justice for the death of a 16-year-old boy who died a few days earlier after being stabbed during a fight. Lethal violence has increased since the election of New Democracy, as the camp population tripled in just six months. People have been forced to battle over resources with no protection, allowing violence and exploitation to escalate. The conditions exacerbate regional conflict and racist violence, with fights between Afghans and those from African sates, the Hazara and Tajik communities, and allow domestic violence to flourish. Criminal structures have been able to take root, with many reporting threats of violence and robbery from organized mafia groups. 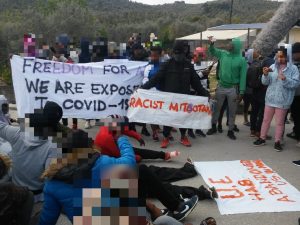 On 22nd April, Moria camp’s African community invited all to join them in a demonstration for ‘Liberty, nothing but freedom’. The community is affected disproportionately by detention and rejection, with many men from African states detained immediately upon arrival in Greece in the Pre-Removal Detention Centre, where their asylum claims are fast-tracked and rejected at breakneck speed. The community demanded that Greece ‘End the rejection, imprisonment and deportation of refugees’. The concerns were:

This page will be updated with new mobilisations as they occur.